The Château lies in the foothills of the Cevennes National Park. A wild and beautiful area – now a designated a UNESCO World Heritage site – which forms the southern part of the Central Massif. This mountainous region has a fascinating and chequered history and was settled as far back as the Roman era. In fact, Pliny declares in his history of the world that the most appreciated cheese in Rome is the one from the Mont Lozère, some 50km to the north! So, although the Cévennes appears remote in fact the region was colonised and fought over by Wisigoths, Francs, Moors and Saracens from the earliest times.

Branoux village
The village of Branoux, which sits on the hill directly behind the Château du Fraissinet, is linked to the nearby priory of St Peter at Blannaves. The priory church, founded in the 11th century, still stands above the lakes of Camboux (3km) and is well worth a visit. It is likely that the establishment of the priory was linked with the monks who were sent out from overcrowded monasteries around Avignon. These displaced ‘frères’ founded numerous settlements and priories in the Gard region. Around 1350 we begin to find old forms of the name Branoux in the archives: Brannos, Branosco. 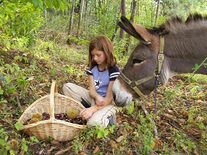 Maddy & Daisy gathering chestnuts
The earliest mention of the Château du Fraissinet so far discovered is in an ancient local book dated 1640. At that time the château was listed as a fortified farm presided over by a Seigneur. The property also included a mill and was clearly a substantial residence which probably owned most of this valley.  We know from local people that sweet chestnuts were farmed here and it is still possible to see some of the ancient trees in the grounds - particularly in the woods behind the gites les Chataigners and les Tilleuls. These trees produce very old varieties of chestnut– the co-operative we took them too couldn’t identify them. They continue to fruit prolifically in the autumn. 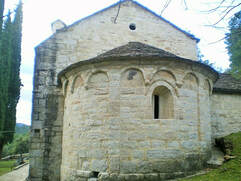 Ancient church of Blannaves
Only a few years after the Seigneur was registered at the Château du Fraissinet, the Edict of Nantes − which ensured religious tolerance − was revoked and the religious Wars of the Camisards began. There was considerable fighting in this corner of the Cévennes and it is written that Gédéon Laporte, a prominent Protestant leader, lived in Branoux at the end of the 17th century.
In 1703 the Protestant Camisards set fire to the church of the church of Blannaves (Catholic) and the same year the village of Branoux  (Protestant) was pillaged and partially destroyed leaving 52 dead. The origin of this attack was the curate of the neighbouring (Catholic) village of Saint Cécile d’Andorge with a band of 500 ‘Cadets de la Croix’.  To this date there is rivalry and mistrust between the villages of St Cécile and Branoux.

Château courtyard
It is reasonable to assume that the Château du Fraissinet also suffered in these local battles. During renovations to the building we have discovered evidence of what looks like a fire and we think that the château itself was at least partly destroyed during this epoch. There are clearly several layers of build as can be witnessed in the courtyard.
It is fascinating to speculate on who might have lived in the château over the centuries since the Seigneur. Local people speak of ‘le Comte’ – the Count – probably M.Pierre Alphonse Gazay, Consul General of Constantinople who bought the property in 1889. 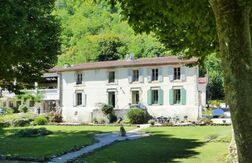 M Gazay completely renovated and modernised what would then have been an ancient mas (farmhouse), adding the beautiful Parisien façade and also laying out the formal park and gardens. Tax records indicate it continued to be managed as a sweet chestnut farm during this period.
In 1916 the property passed to the commune of la Grand'Combe, so we assume M Gazay died and his heirs, if there were any, didn't want to take on the house and extensive grounds.

In the period following the Second World War, the Château du Fraissinet became a summer camp for local children, a School of Electronics and finally a factory for the underwear brand Hom. These changes of use involved many internal and external alterations. Unfortunately, the building wasn’t treated sympathetically and as well as updating the electricity and plumbing many of the original features were destroyed and lost. 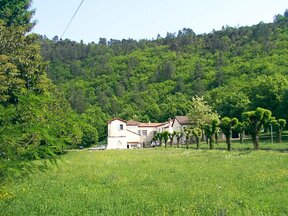 Château du Fraissinet 2004
When Chris and I arrived in August 2002 with four of our children in tow, the Château du Fraissinet was in a very dilapidated condition but was structurally sound. We moved in at the end of a very hot summer when the stone walls of the building had been warmed through and the humming of the cicadas resonated from the trees. It was like Sleeping Beauty’s castle, surrounded by undergrowth so rampant that it was impossible to see the house from the gates. Immediately, we began to clear the grounds, cutting through the brambles to make a path to the river. The first two years were spent working on the gardens and the house to get the gites up and running. Initially, the Château apartment, followed by les Chatagniers and les Tilleuls. Slowly, working almost entirely without outside help, the other gites have been developed.
The biggest projects to date have been the transformation of the huge covered Garden Terrace from a featureless covered playground to a stunning wedding venue and summer Yoga shala. And, most importantly, the construction of our beautiful swimming pool with its series of smaller pools for relaxation and for younger guests. For this Chris did agree to hire a man with a digger and a lorry-load of ready-made concrete!

Today, the developments and renovations continue with the de-rendering and re-pointing of the courtyard to reveal the old stone walls and the ghosts of long-ago windows and doors. Despite these clues, without proper plans or old photographs we can only speculate on how the building must once have looked and who might have lived here. What is certain is that the guests who visit the Château du Fraissinet on holiday add to the rich tapestry woven between its thick stone walls and in its shady grounds becoming part of its fascinating narrative.

Le Fraissinet, cadastre, 1811. The house is the red rectangle in the bottom left-hand corner. 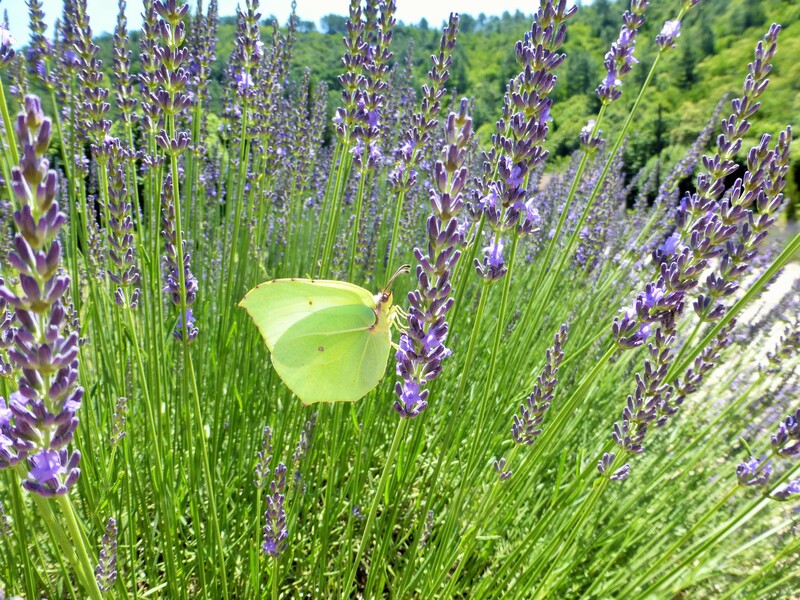 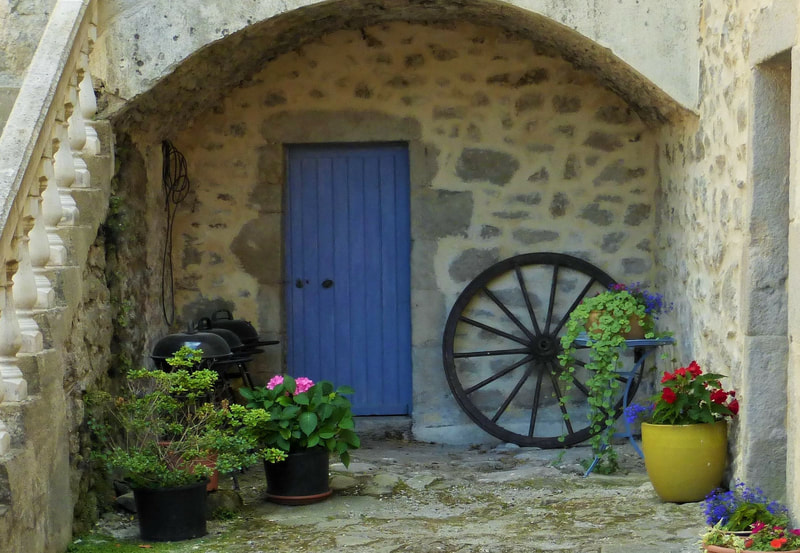 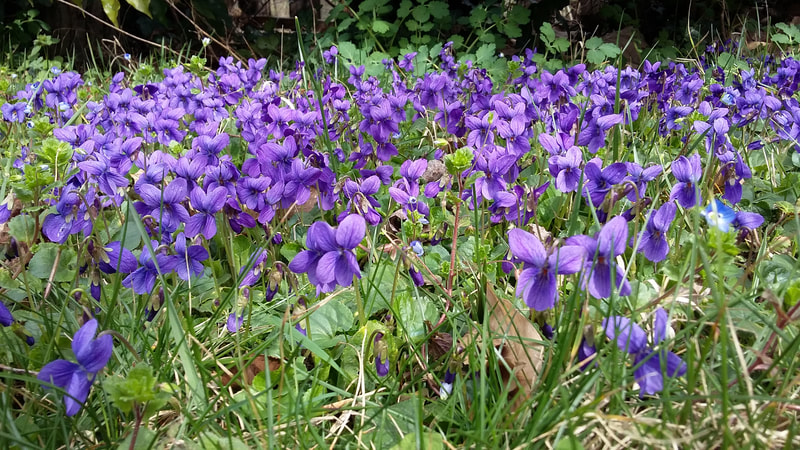 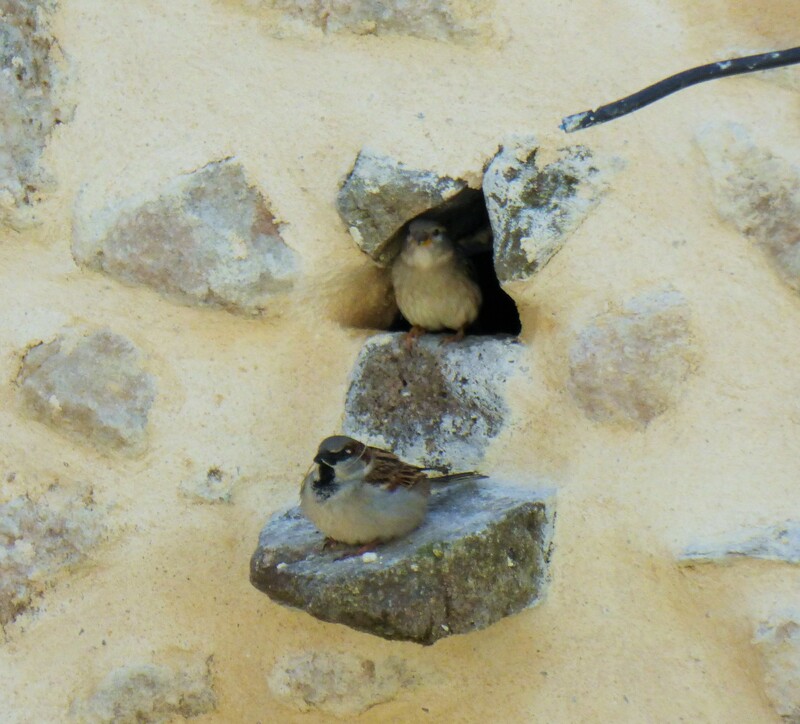 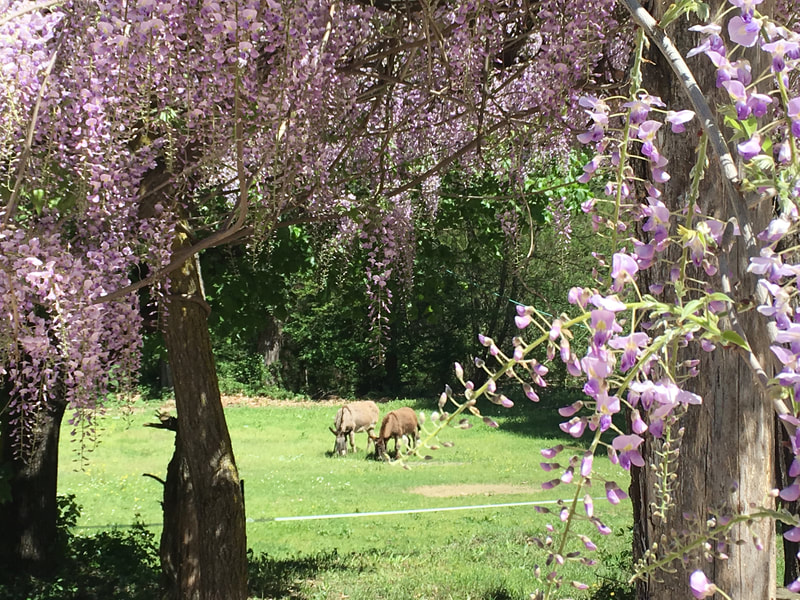 We look forward to welcoming you to Château du Fraissinet